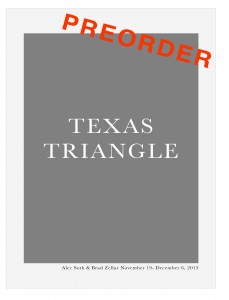 From November 19 through December 6, The LBM Dispatch will be on the road in the Lone Star State, exploring the people, places, and mythology of the megapolitan area known as the Texas Triangle. This 60,000-square-mile territory, home to more than 70% of the Texas population, includes the cities of Dallas, Fort Worth, Austin, Houston, and San Antonio, as well as countless small communities where the ethos and folklore of the Old South and the Wild West converged to create an utterly unique culture that continues to loom large in the national imagination.

Be sure to follow us on The LBM Dispatch Tumblr

Dispatches #1-3 are sold out, but you can also order copies of Three Valleys and Colorado.

We cannot display this gallery From May 17-24, Brad Zellar and I visited a dozen towns and cities throughout Ohio in search of community life. We went to soup kitchens and McDonalds, proms and churches, golf courses and cemeteries. Along the way we recorded the faces and voices of people longing to connect with their neighbors. We made some powerful connections too (Brad became a member of the Loyal Order of the Moose). To commemorate this remarkable trip, we’ve produced a newspaper a mere week after our return.

After selling out the first edition of House of Coates in under two weeks, we’re happy to announce that we are printing another 1000 copies in a sexy brown cover.

Please note that orders of the 2nd edition will not be shipped until late April. We appreciate your purchase and your patience.

Thanks to everyone that came out to the fantastic book signing event at the Midwest Hotel.

We cannot display this gallery

Listen to the interview here: http://tinyurl.com/7ans3nc

To celebrate the release of House of Coates, Little Brown Mushroom will be hosting a very special book signing event at the infamous Midwest Hotel.

Zellar & Soth will be signing books in the hotel office. Visitors can also see a small exhibition of photographs in one of the hotel rooms.

Note: We will be holding 100 copies to sell at the signing event on March 12th. These copies are only available for customers who visit the Midwest Hotel. House of Coates is going fast. Since releasing it last Wednesday, we only have half of the 1000 copies left. If you plan on buying a copy, we recommend doing so sooner than later.

Little Brown Mushroom is proud to announce the release of a new book, House of Coates, by Brad Zellar (with photographs by Lester B. Morrison).

In House of Coates, writer Brad Zellar pieces together the story of legendary recluse Lester B. Morrison. Working from a handful of encounters and contradictory conversations, a sketchy paper trail and often confounding interviews with individuals who may or may not have been “associates” of Morrison (including Morrison’s former collaborator Alec Soth), Zellar attempts to reconstruct one episode from Morrison’s decidedly episodic life. In the winter of 2011, Zellar finally crossed paths with his evasive subject, and was –with Morrison’s permission– granted access to the results of an MMPI (Minnesota Multiphasic Personality Inventory) test that Morrison submitted to in August of 2009, along with the administrating psychiatrist’s copious notes. Finally, in late December of last year, Zellar received in the mail a duct-taped shoebox –marked “PERISHABLE”– containing almost two hundred photographs that Morrison termed “disposable documents of the approximate period in question.”

From these raw materials designer Hans Seeger has assembled a book that Morrison himself has pronounced, “Probably close enough to what might or might not have happened, and that’s as much as I’ve learned to expect from the so-called ‘real world.’”

We are having a holiday sale from today through Friday (11/28-12/2). For order’s of $20 or more, we will add a FREE copy of The Little Brown Mushroom Coloring Book and will wrap your purchases in Jason Polan/LBM wrapping paper. To order, go to LITTLEBROWNMUSHROOM.COM

Unfortunately we sold all 100 available copies of La Belle Dame Sans Merci in twelve hours. PhotoEye should have copies soon. In Europe, check with Le Bal and Dirk Bakker. Many thanks,