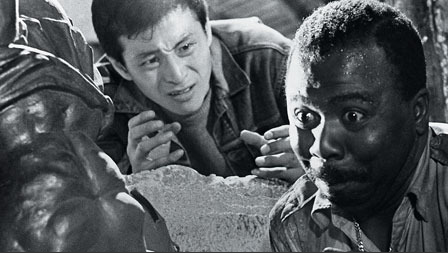 As part of the research for my our new LBM project, THE FRANK ALBUM, I’ve been looking for stories about Westerners in Japan and the ways in which one culture can appreciate another without necessarily understanding it. I struck gold when I stumbled on Black Sun. The lead character, Akira, is a petty thief and drifter in love with jazz (the film is named after a Max Roach album he buys at the beginning of the film). When Akira runs into Gil, an African American GI on the lam for murder, not only is he unafraid, he’s overjoyed. For Akira, all black Americans are cool jazz men. He doesn’t see Gil, he sees a fantasy; at least until Gil kills Akira’s dog, Monk. The movie is bursting at the seams with frantic energy and utterly bizarre acting. Gil’s mumbling English is almost incomprehensible. But in this way the viewer almost sees him like Akira does, as an exotic alien. My favorite thing about this movie was the jazz. One can only imagine how fresh, alive and utterly foreign something like Thelonius Monk sounded in Tokyo in 1964. 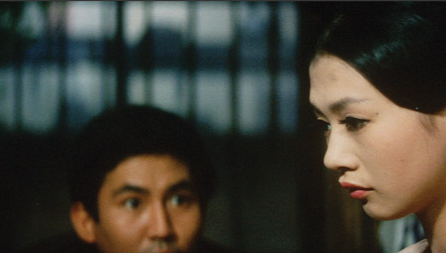 Pleasures of the Flesh is a story of self destruction. I won’t bother explaining the complicated plot, but essentially a good man makes a bad decision, comes into a lot of money and eventually becomes everything he once despised. The moral of this protagonist’s deeply immoral journey: money can’t buy you love. Whether or not this moral is a metaphor for Japan’s postwar prosperity is hard to day. My favorite thing about this movie was seeing just how far Oshima was willing to push the protagonist’s debasement. It is remarkable to me that a nearly fifty-year-old film from Japan can be this bitterly nihilistic. 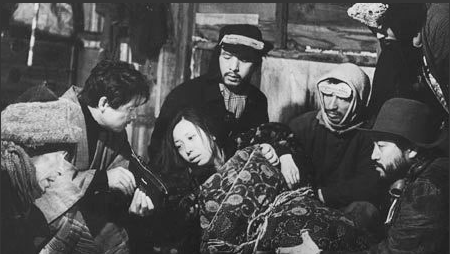 An entomologist from Tokyo with marital problems goes to the desert to look for beetles. After missing his train, he agrees to spend the night at a woman’s hut in the bottom of a sand dune. The hut, he soon learns, is a trap that he cannot escape. My favorite thing about the movie was the way Teshigahara made the sand come alive as a character. Midway through this two and a half hour masterpiece, I decided to take a nap. The surrealism of the movie seamlessly blended with my dreams. When I woke up, I swore I had sand in my mouth. 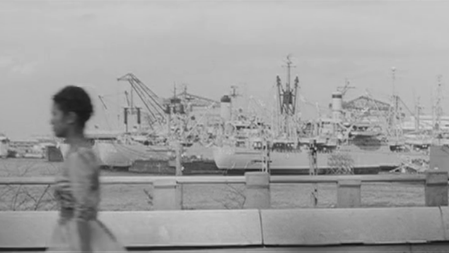 While Pigs and Battleships was cinematically more conservative than the other three films I watched (Imamura came from the studio system), the movie is a powerful depiction of clashing cultures. The film is set in the port town of Yokosuka where gangsters and prostitutes try to make a buck off of the sailors on shore leave. The movie paints an ugly picture of both the Americans and the Japanese. Or I should say, it paints an ugly picture of American and Japanese men.

After watching Pigs and Battleships, I realized how every film I watched dealt with prostitution and the subjugation of women. In fact, this was the third film in a row with a rape scene. In the case of Pigs and Battleships, this is a horrifically brutal gang rape by American sailors of the movie’s female lead, Haruko. Afterward, Haruko tries to steal money from one of the sailors and is arrested. Despite all of this, Haruko not only survives, she is left at the end of the film as the one true hero.

The film’s title is not an accident. The battleships are American. The pigs are Japanese. I think only a young man would get away with this, but this is sort of a film that defines contemporary Japan as a pigsty. First as a moral pigsty, then as a social pigsty, as an economic pigsty and finally, at the climax of the film, as a literal pigsty…In terms of Imamura’s thinking, we’re talking about the cusp of the 1960’s. He sees Japanese people becoming increasingly materialistic, increasingly reckless, increasingly crazy actually, and his interest is shifting increasingly in the difference between men and women in this environment. The men he sees as being fundamentally weak, foolish, helpless. The women as being fundamentally tougher, stronger, more enduring – more likely to survive and adapt to the changing environment.

Like all of the New Wave Japanese films I watched, Pigs and Battleships looks at the new world with terror and skepticism. My favorite thing about the film is that it found a glimmer of hope neither in Western progress nor in Eastern tradition, but in the strength and resiliency of women.