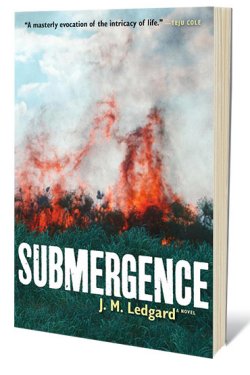 I’m currently in Colombia for an exhibition of my project from ten years ago, Dog Days Bogota. While I’ve always been eager to exhibit this work in Colombia, I’ve been equally apprehensive. I know nothing of the complexities of this place and don’t want to pretend otherwise. The other day I had coffee with a fellow photographer from Minnesota who lives in Medellín. He was explaining to me the six official social classes in Colombia. How could I publish a book about this place and not know this? My only defense is that the pictures were made as a sort of family album. In terms of cultural investigation, they barely scratch the surface.

I thought a lot about ignorance, cultural and otherwise, while reading J.M. Ledgard’s deeply intelligent novel Submergence. The book tells the story of two travelers: A British spy held captive by jihadist fighters in Somalia and a half-French, half-Australian biomathematician exploring the depths of the Greeland Sea.  The book is part love story (the two meet on holiday at an exclusive French hotel) and part suspense story (will the spy escape? will the couple meet again?). But mostly, the book is a somber ode to the cosmic ignorance of Homo sapiens.

“We exist only as water,” the scientist says to the spy over dinner, “We’re nature’s brief experiment with self-awareness. Any study of the ocean and what lies beneath it should serve notice of how easily the planet might shrug us off.”

Ledgard contrasts the roles of the spy and the scientist this way:

They had different understandings of time and space. He worked on the surface, the outside of the world. For him, everything was in flux. He was tasking agents to infiltrate mosques in Somalia and along the Swahili coast. He was concerned with alleys, beliefs, incendiary devices; with months weeks, days, with indelible hours. For her, an age was an instant. She was interested in the base of the corrosive saltwater column, delimiting through mathematics the other living world, which has existed in darkness and in continental dimensions for hundreds of millions of years.

Submergence is a brilliant book. It is knowledgeable not only about East Africa and oceanography, but also religion and literature. But fundamentally the book seemed to me about the necessity of recognizing our ignorance.  As Ledgard writes on page three: “The essence of it is that there is another world in our world.”