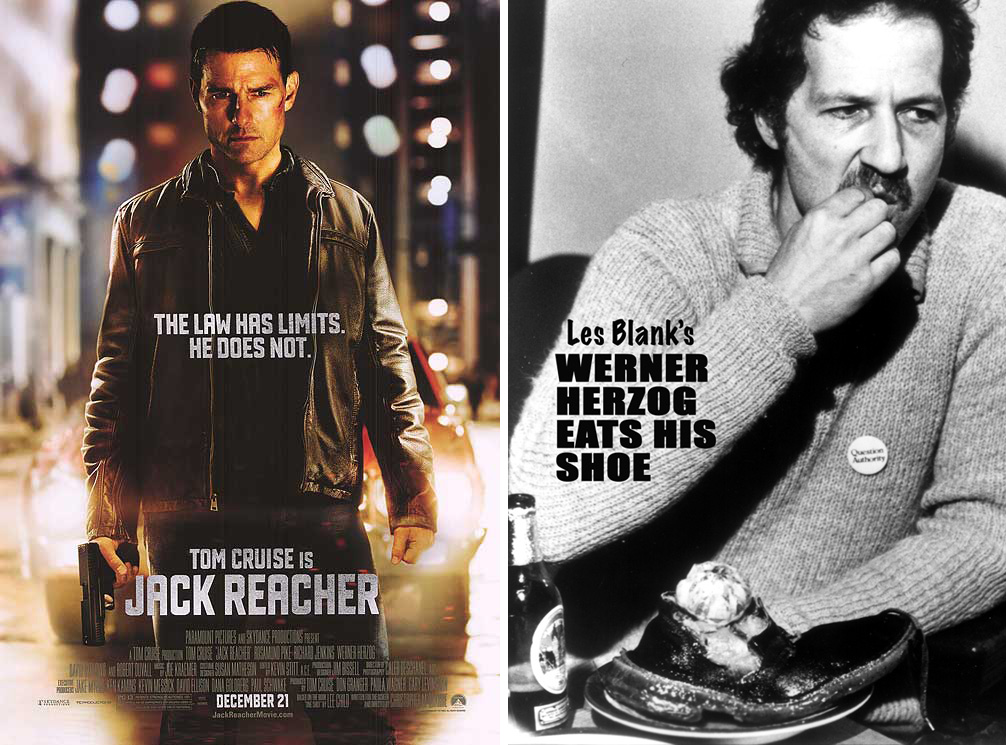 Confession: I’ve probably read a half dozen of Lee Child’s pulp fiction novels featuring his drifter protagonist Less Child. I honestly couldn’t tell you which of the eighteen novels I’ve read or, for that matter, recount any of the plots. For me the books are just a warm bath of masculine escapism.

One of the reasons I took on this weekly Popsicle assignment was to break the habit of reading this kind of stuff. So when I learned that there was going to be a Jack Reacher movie starring Tom Cruise, I definitely planned on skipping it.  But last week I was confronted with the choice of watching the movie during a long flight to Bogotá. While I’m committed to raising the bar on my cultural consumption, I’ve also made the decision to forgo watching serious films on airlines. I still haven’t forgiven myself for watching The Tree of Life over the course of two separate transatlantic flights.

So I watched Jack Reacher. The movie was entertaining, but like the books, also forgettable. What I do remember was that Werner Herzog played the bad guy. Werner Herzog! Why would the greatest living filmmaker appear in a summer Hollywood blockbuster?

The answer is that Herzog has always been open to surprise and contradiction. “I invite any sort of myths [about myself],” he once said, “because I like the stooges and doppelgangers and doubles out there. I feel protected behind all these things. Let them blossom!”

After seeing Herzog on the screen, I was hungry for more, so I decided to watch Les Blank’s film, Werner Herzog Eats His Shoe. The back-story of the film is legendary: Herzog promised he’d eat his shoe if Errol Morris completed his film Gates of Heaven. While I initially thought it would be a one-liner, Werner Herzog Eats His Shoe ended up being a brilliant portrayal of Herzog’s iconoclastic genius.

The film starts with the sound of switching television channels with this voiceover by Herzog:

The film then goes on to describe Herzog’s support for Errol Morris’s movie and, as promised, shows him eating his shoe. While chewing, Herzog is asked what the value of film is for society. His contradictory answer is fascinating:

I think it gives us some insight. It might change our perspective and ultimately it may be something valuable. But there is a lot of absurdity as well. As you see [pointing at his shoe] it makes me into a clown. And that happens to everyone. Just look at Orson Wells or even people like Truffaut. They have become clowns. What we do as filmmakers is immaterial. It’s only a projection of light. And doing that all your life makes you just a clown. It’s illusionist’s work. It’s embarrassing to be a filmmaker.

The day after eating the shoe, Herzog is interviewed again. And again he contradicts himself:

A civilization is going to die out like dinosaurs if it doesn’t develop an adequate language or adequate images. I see it as a very dramatic situation. We have found out that there are serious problems facing our civilization like energy problems or environment problems or nuclear power and overpopulation. But generally it is not understood yet that a problem of the same magnitude is that we don’t have adequate images. That’s what I’m working on: a new grammar of images.

Throughout this short film Herzog whipsaws between fierce conviction and comic ambivalence. Perhaps it is this unstable dualism that has kept his vision so vital. I love that he can star in a Tom Cruise movie (and compare it to Melville!) while simultaneously directing documentaries about death row. Now the only question is which Herzog film I’ll watch next: Stroszek or his new web documentary on texting while driving.