In preparation for my upcoming trip to Japan, I’ve been thinking a lot about what it means to photograph and interpret another culture. To what extant did Robert Frank’s Swiss heritage, for example, shape the way he saw and interpreted The Americas?

One peculiar example of cross-cultural seeing is Yasuhiro Ishimoto. Ishimoto was born in San Francisco in 1921, went back to Japan at the age of three, returned to the US at eighteen, spent time in an internment camp during WWII, studied photography in Chicago, then spent the rest of his life living in Japan but traveling back often to the US. Minor White referred to Ishimoto as “a visual bilinguist.”

Perhaps this partly explains why Ishimoto was also such a visual omnivore. I own the 1969 edition of Chicago, Chicago, and it is pretty much a compendium of every mid-century photographic style. A note in the back of the book by Yusaku Kamekura explains how the book was created:

Ishimoto spent between 1960 and 1962 photographing Chicago. This was an immense amount of film, from which he selected 1000 shots and printed them…

April 16: A cold rain poured down all day. On that day I saw the whole set of Ishimoto’s Chicago, Chicago. The two of us started to work on editing, and separating them into blocks, we put together the pages. Then we cut down the photos to two hundred.

It was May 10th when the final decision was made and the photos brought, divided into blocks. With few exceptions, the choices were largely those made on the rainy day.

Unfortunately, I think the book would be much better if they’d worked longer. While the “blocks” show Ishimoto’s hungry eye, they also show his heavy influences. There are sections with decayed buildings and new skyscrapers in the manner of Ishimoto’s teachers: Aaron Siskind and Harry Callahan. One is reminded of Helen Levitt in his portraits of children. But it is the influence of Robert Frank that is most notable. A number of the pictures in Chicago, Chicago are dead ringers for iconic pictures from The Americans.

While the editing is flawed, the book still has so many great pictures that it is a pleasure to look at. But the greatest pleasure, for me, is the final image in the book: 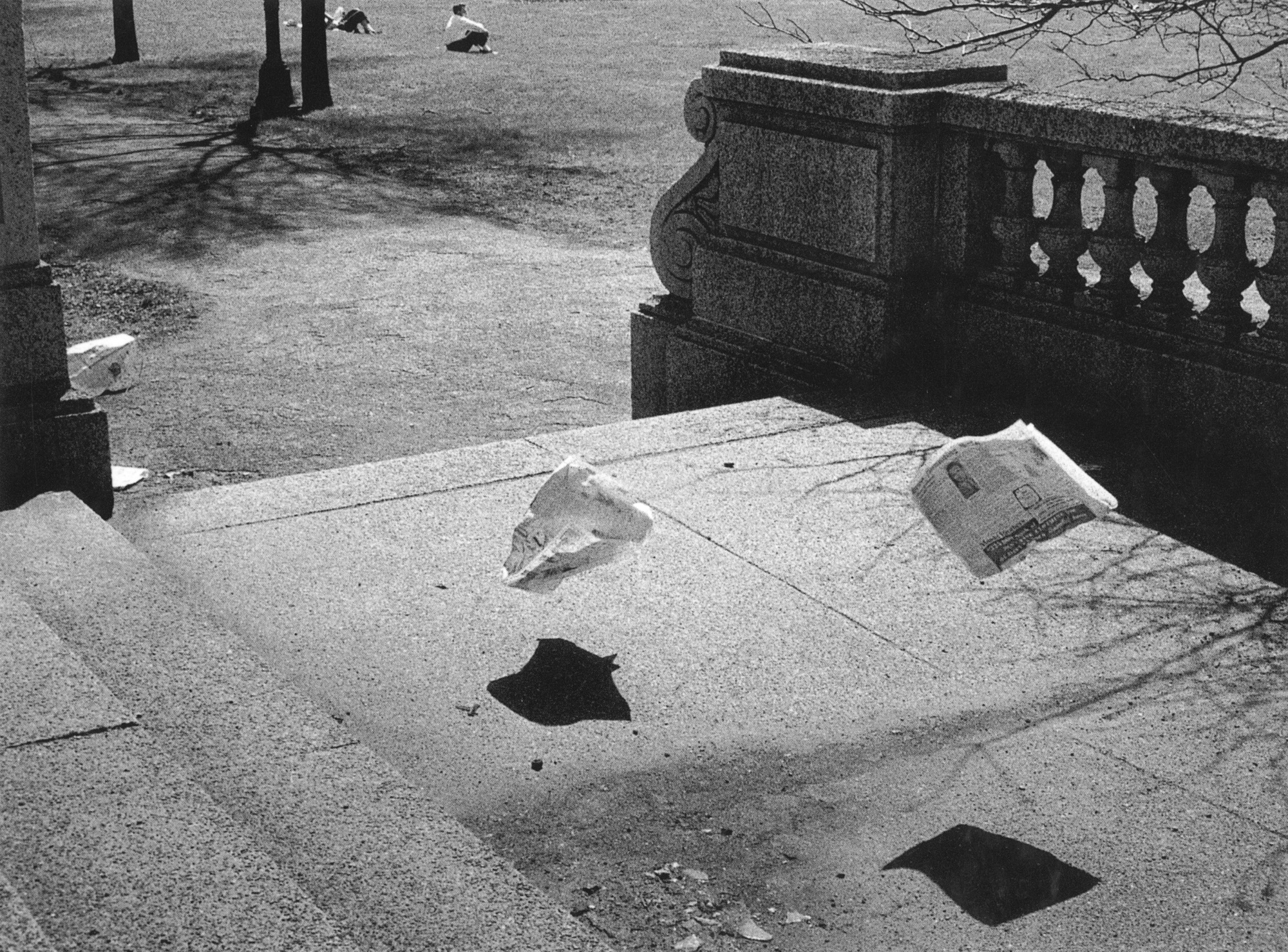 For their 1999 exhibition catalog, Yasuhiro Ishimoto: A Tale of Two Cities, The Art Institute of Chicago put this image on the cover. Curator Colin Westerbeck wrote the following:

It is an image of the hot air of the American press (nothing could typify that better than the Chicago Tribune), and of the Windy City, as Chicago is called. This photograph’s allusion to Chicago’s nickname makes it a fitting end to the book, though at first glance the image seems completely unassuming…In fact, Ishimoto pursued those sheets of newspaper for over an hour. There is nothing casual about the photograph. It instills into the book’s ending a “hush profound” like that in which the sound of the cicada seeps into the rock in Basho’s haiku.

For me what makes the image so great is that it isn’t a picture of the American press, or Chicago, or haiku for that matter. With this image, Ishimoto largely escapes the burden of cultural influence. Like the title of his first book (which I unfortunately don’t own) the picture is simply “Someday Somewhere.” The newspaper flies away, language is lost. The only thing left for the bilinguit to do is look.

One Reply to “Popsicle #35: A photograph by Yasuhiro Ishimoto”