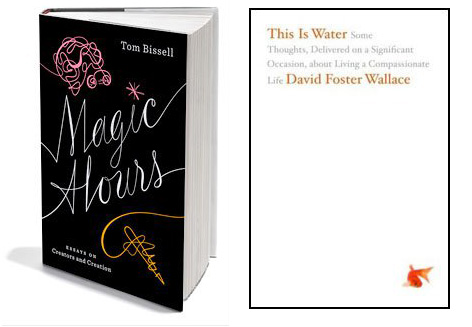 A friend who works at McSweeny’s recently sent me a collection of essays called Magic Hours: Essays on Creators and Creation by Tom Bissell. In an essay entitled ‘The Theory and Practice of Not Giving a Shit,’ Bissell writes about visiting Jim Harrison in Montana. Harrison spins some charming, larger-than-life yarns. But the most poignant moment comes when Harrison mentions Bissell’s other literary hero, David Foster Wallace:

Harrison brought up Jonathan Franzen’s much discussed New Yorker piece about Wallace, in which Franzen revealed that he could never get Wallace interested in his passion of bird watching. “This is interesting,” Harrison said. “Of the 12 or 13 suicides I’ve known, none of them had any interest in nature. In other words, they had no interest in what Rimbaud called ‘the other.’ The otherness, say, of nature.” They could not make, Harrison said, “that jump out of themselves.”

In another essay in Magic Hours, Bissell writes about This Is Water, the posthumously published transcription of Wallace’s 2005 commencement address at Kenyon College.

Wallace was often accused, even by his admirers, of having a weakness for what Nabokov once referred to as “the doubtful splendors of virtuosity.” Standing before the graduates of Kenyon College, Wallace opted for a tonal simplicity only occasionally evident in the hedge mazes of his fiction. He spoke about the difficulty of empathy (“Think about it: There is no experience you’ve had that you were not at the absolute center of”), the importance of being well adjusted (“which I suggest to you is not an accidental term”) and the essential lonesomeness of adult life (“lords of our tiny skull-sized kingdoms, alone at the center of all creation”).

This issue of empathy and interest in ‘the other’ keeps swirling around everything I read lately. What I appreciated about Magic Hours was Bissell’s ability to gracefully reflect on his own experience while investigating other people’s creative lives. I’m  also grateful that it encouraged me to listen to Wallace’s commencement address – the best sermon I’ve ever heard: